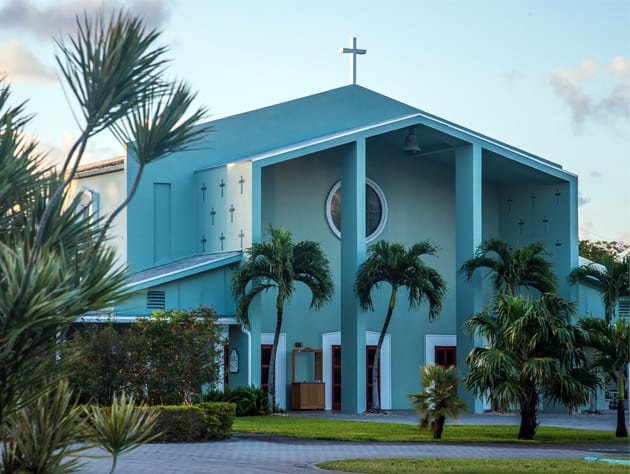 All Saints Episcopal Church was originally founded as a mission congregation by eight women in 1912. For its first nine years, the congregation met in various locations around the City of Fort Lauderdale before purchasing property in Stranahan Park in 1921.

In 1938 the congregation was determined to be financially self-sufficient and was re-designated from a mission congregation to an official Episcopal parish. After ten years of continued growth, the church began to build a new facility at the current location in iconic Collee Hammock on the New River. The facility was consecrated on November 6, 1958.

Today, All Saints celebrates a diverse membership base and maintains a myriad of community outreach partnerships, welcoming to all regardless of age, race, gender, or sexual orientation.

The All Saints Episcopal Church building was designed by architect, Clinton B. Gamble, who was a member of the church at the time. Several important items from the original location in Stranahan park were preserved and incorporated into the new building, including: a carving of the Lord’s Prayer in large gothic font along the wooden beams of the sanctuary’s periphery, the original altar rail, altar, and lace covering (now present in St. Luke’s Chapel), and the Good Shepard stained glass window.

On the north side of the sanctuary is the Rose Window and on the east and west walls are nine stained glass windows depicting saints and important figures from Anglican/Episcopal church history.

Bulletins for each service will be posted on our website:
https://allsaintsfl.org/bulletins/